Through robotic surgery, a smaller incision can be made as compared to large opening in traditional form of surgery. This will lead to a much faster recovery time since the opening is much smaller and hence leading to a shorter hospital stay. Patient will also be able to return to work faster as compared to the longer recovery time for other surgery. For a minimally invasive knee replacement surgery, the hospitalization period is only 1-2 days and recovery is 1 month as compared to 4-6 days and recovery period of 3-6 months in traditional surgery.

In addition, there will also be decreased blood loss which can help to avoid hemorrhage situation. Patient will also suffer less pain, lower chance of infection as well as scarring of a much lower extent

Doctors often become fatigue especially during long hours of operation. A coronary bypass surgery can last for 3-6 hours which can test the endurance level of a surgeon. The longest operation in the world is a 96 hours operation by Gertrude Levandowski for cyst removal. Such long hours of operation make the doctor tired and decrease his concentration level which is of utmost importance during a surgery. Fatigue can also potentially induce misjudgment and mistakes which can be fatal.

However, robots will not be tired as they are not human being. Their “hands” are often stable and steady and will not suffer tremor. They are able to operate on the patient under long period of time without having any negative impact on their judgment, accuracy and stability. As such, it seemed that robots are a good replacement of human surgeon as it can greatly reduce human error and increase the chance of success of the surgery.

Robots also bought about increased precision and accuracy as compared to human. For e.g. the Automated Endoscopic System for Optimal Positioning (AESOP) is a commonly used robot in endoscopic surgery like gall bladder, gynecological surgery and hernia surgery. The system is able to recognize the voice command of the surgeon and move its steady mechanical arm accordingly. Surgeon is able to use robots to control small movement accurately and enjoyed magnified view of organs and part. This will certainly lead to a higher chance of success for robotic surgery.

Telescopic camera is often used in surgery to have a view of parts that are otherwise impossible to see by a human surgeon. The camera is also minimally invasive and deviate from the traditional method where a huge cut is needed to have access to the organs. Robots are much more flexible and enhance the precision needed. Greater accessibility to vital parts allows the surgeon to make minimal damage to other organs or skin. 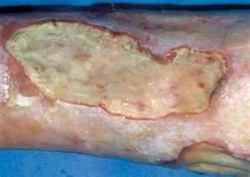 In the United States, it has been reported that there are 1.5 million surgical site infections annually. This results in a national cost of $130 to $845 million a year as patients have to undergone extra operation or a longer hospital stay. With robotic surgery, there are much fewer humans leading to a lower chance of infection. Robots can remain in sterile environment and avoid exposure to contaminants.
Source: (Surgical-Tutor, 2012)